Heroic Kid Stories that Are Worth Emulating

When asked about a favorite superhero, we are quick to utter the names of superheroes that our kids love—superman, spiderman, batman, to name a few. The truth is that heroes can come in all forms and sizes. In fact, there are heroes who, despite their innocence and inexperience, are willing to jeopardize their lives in order to save another.

In celebration of the youngest and the bravest kids, here are three true and heroic stories featuring real-life child heroes.

One hot day in May, a couple was lounging nearby the hotel pool in Destin, Florida. With them were their two children, one was around eighteen months while the other one was a toddler. Meanwhile, Riley Braden, then five, was playing in the shallow end of the swimming pool. Later on, Riley saw the couple’s eighteen month-old girl walked over the pool and fell in without anyone noticing the incident aside from her. Being a daughter of search-and-rescue divers, Riley is familiar with saving people from the water. She thought of shouting for help, but realized that she had to act fast or the baby won’t be able make it. She then dove down and rescued the child from the bottom of the pool. When she retrieved the baby, she shouted, “I’ve got the baby! I’ve got the baby!” The parents jumped onto their feet and quickly rushed toward the baby.

Tip: Educate your child the right way to help a drowning person.

Teach your child to shout out for help. If able, your child can take action as long as you were able to prep him or her on the right way to rescue a drowning victim.

One night, Linsey Knerl went to the kitchen to prepare dinner, leaving her three young children in the living room watching TV. Minutes later, her four-year-old eldest son, Micah, popped in and firmly said, “Mom, baby Moses needs help.” Micah was referring to Linsey’s youngest son who was just eleven months old. She couldn’t hear Moses crying, so she thought that Moses just wants his bottle or his toy—nothing serious. So Linsey replied, “Okay, just a minute.” However, seconds later, Micah approached her again and said, “No, Mom, I really think Moses needs help.” Micah then pulled her arm guiding her to the living room.

Linsey’s world was shaken to see Moses on his tiptoes with a window-blind cord wrapped firmly around his neck. His face was purple and he didn’t seem to be breathing. She started screaming and crying, so were the other children in the room. Linsey quickly but carefully removed the cord around Moses’ neck and called the pediatrician. Luckily, Moses was okay, but if it weren’t for Micah, Linsey might not find Moses in time.

Tip: Eliminate the risk of choking and strangulation

Get cordless shades or cut the loop of the window blind cord into two strands and use a cord winder or a hook instead.

3. Seventh-grader stopped a bus from crashing after the driver fainted

One early morning in April 2012, Jeremy Wuitschick was sitting on his usual seat on the school bus. Minutes later, he saw the driver slumping down: he passed out! The driver’s hands left the steering wheel, but the bus kept going forward with no one controlling it.

Jeremy grabbed the controls and guided the bus to the side of the road. He yanked the keys out of the ignition to bring the bus to a halt. After everyone was safe, the students in the bus called 911. Another child superhero was unveiled when one kid, Johnny Wood, performed CPR on the driver while waiting for the ambulance to arrive. On that day, Jeremy and Johnny became real-life heroes. 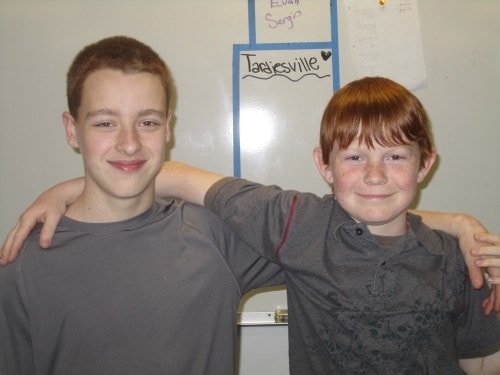 Does your child know how to handle a vehicular emergency? Teaching the basics of driving and how different parts of a car work will help prevent accidents or even deaths among young children.

Kids can become heroes in their small ways. Firstly, train kids to be brave so that when danger comes they can get all the courage they have to help themselves and others. Plant courage day by day.

Good luck on molding your next child superhero!